Michael Argenyi: A case for “meaningful access”, an expectation for common decency 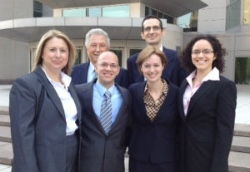 Michael and his attorneys

The final barrier for Michael Argenyi to a medical education fell on December 19, 2013.

After a four year legal battle, a federal judge ordered Creighton University to provide captioning and interpreters so that Michael Argenyi can at long last complete his medical education.

The decision clears the way for Argenyi to complete his medical education at Creighton, which must provide him with the interpreters and captioning he should have had all along.

Michael’s fight for the right to access his education is over.  He has returned to medical school at Creighton University.  The school is providing Michael with the auxillary aids and services as ordered by the District Court and the matter has now been resolved.

Argenyi was represented by Disability Rights Nebraska, the National Association of the Deaf, and Stein & Vargas, LLP.

Michael is a deaf person who began using hearing aids before he was one year old. To distinguish between sounds that appear the same on a speaker’s lips, Michael relied on “cued speech,” which uses hand signals to represent sounds. He does not know sign language.

In the eighth grade he began using Communication Access Real-time Transcription (CART), a system that transcribes spoken words into text on a computer screen. He also received a cochlear implant before he began undergraduate studies. While attending Seattle University he used both cued speech and the CART system as an accommodation and graduated with a 3.87 GPA.

When Michael applied for admission to Creighton Medical School he noted that he was hearing impaired and asked for reasonable accommodations under the Americans with Disabilities Act (ADA) and Section 504 of the Rehabilitation Act.

Creighton University offered alternative assistance which Michael tried but the alternate methods of accommodation failed to meet his needs. In fact, one expert noted that the auxiliary aid offered by the University worsened Michael’s speech recognition. Michael continued to ask for the cued speech interpreter and CART system. In spite of his requests, Creighton University refused to provide the needed accommodations. Without the accommodations, Michael was unable to follow lecturers, participate in labs, or communicate with patients. Michael borrowed over $100,000 to provide for his own accommodation so he could stay in medical school.

Michael came to Disability Rights Nebraska for help. When negotiations with the Creighton University Medical School failed we filed suit in the federal District Court on September 24, 2009.

Before Michael had the opportunity for a trial, the federal district court judge determined that Michael had not shown that the requested accommodations were “necessary” within the meaning of the law and she dismissed the case.

Michael appealed that decision to the Eighth Circuit Court of Appeals. Mary Vargas argued the appeal and Dianne DeLair of Disability Rights Nebraska filed the brief seeking to reverse the lower court decision. In a sixteen page unanimous opinion, written by Senior Judge Diana Murphy, the appeals court reversed the lower court’s ruling and ordered the case back to the lower court for trial.

The Appeals Court found the lower court misinterpreted the law plus a key U.S. Supreme Court decision, and Michael presented sufficient facts to raise the issue of whether Creighton University had discriminated against him based on his disability. The Appeals Court concluded that Creighton University is required to provide reasonable auxiliary aids and services to allow "meaningful access" or an equal opportunity for Michael to gain the same benefit as his nondisabled peers.

In September, 2013, a federal court jury concluded after a two week trial that Creighton University discriminated against Michael in violation of both the Americans with Disabilities Act and Section 504 of the Rehabilitation Act. The decision is a historic vote in support of the rights of students with disabilities to have full and equal access to all aspects of their education.

The jury’s verdict sends a clear message that students must be judged based on their abilities and colleges and universities must provide meaningful access to students with disabilities.

More information related to the Argenyi vs. Creighton University case