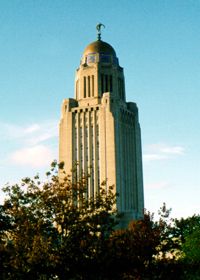 Each year, we publish our Legislative Priorities Chart listing the public policy issues we will be focusing on during the session. The chart consists of three categories:

LB 1053 would allow for a Nebraska judge to authorize the use of video, electronic or telephonic technology for certain hearings. Disability Rights Nebraska testified in support of this legislation.

LB376, which was one of our high priority bills during last year's session, advanced from select file on February 1st. The bill would require Nebraska DHHS to apply for a 3-year Medicaid waiver to start a family support program for developmental disability services. Additionally, an amendment would add provisions of one of our medium priority bills from this session, LB1004, which would require DHHS to engage an independent consultant to evaluate our state's developmental disabilities system.

Disability Rights Nebraska Comments on AM 990 to LB 529

On April 21st, AM 990 to LB 529 was proposed in the Nebraska Legislature. Like similar bills and amendments proposed in the past, AM 990 would enact legislation to authorize the use of restraint on students. In response, Disability Rights Nebraska submitted comments to legislators to voice our concern with the proposed amendment.

On March 29, LB 247 cleared the first-round of debate among Nebraska legislators. The bill would develop a task force to study the implementation of the 988 crisis hotline established by the federal government last year. Disability Rights Nebraska provided testimony supporting LB 247 at its initial hearing.

Jump to a Month

Go to Previous Go to Next

This month does not have any events.